This post is for those who have an electricity bill, and want to see how efficiently they are heating their house, their home, or their apartment.

I ended up with this method, since I found the traditional ways of presenting energy usage data far from intuitive, and the other ways didn’t give me any feeling whatsoever about what really was going on.

Data from my electricity provider

The ways of visualizing the energy usage data available from my electricity provider basically boils down to a couple of graphs, such as:

My personal opinion about those graphs is that they completely miss to convey the most important piece of information: how your energy usage depends on temperature, and how you differ from your expected consumption at your current temperature.

Luckily, my energy provider also had a table with energy consumption per month and average monthly temperatures. The main drawback with their table is that you can’t easily compare energy usage between different months unless the mean temperature was identical. We can fix their table (shown below) by turning it into something more intuitive and descriptive. 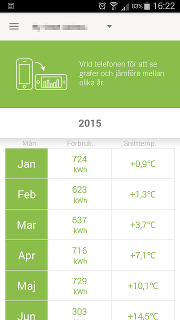 I expected to get some really interesting graphs, since there have been a couple of changes to the heating system during the last years.

Until 2011, we had electrical radiators in the apartments in our area. That’s quite an energy inefficient solution, as shown in the graph below.

But first some statements explaining the graph: 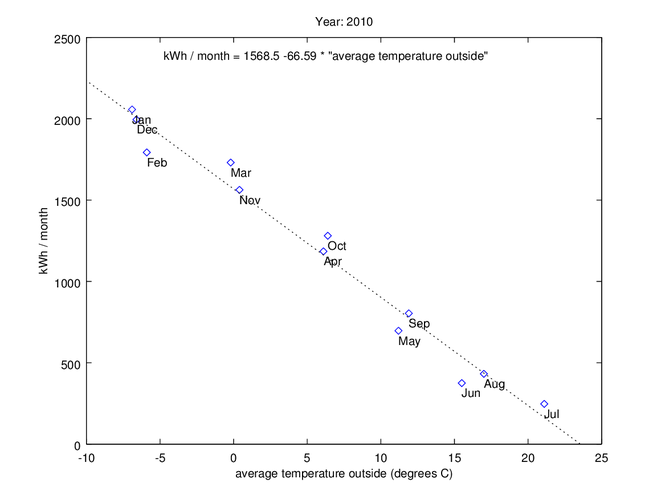 The conclusions I draw from the plot above is that: 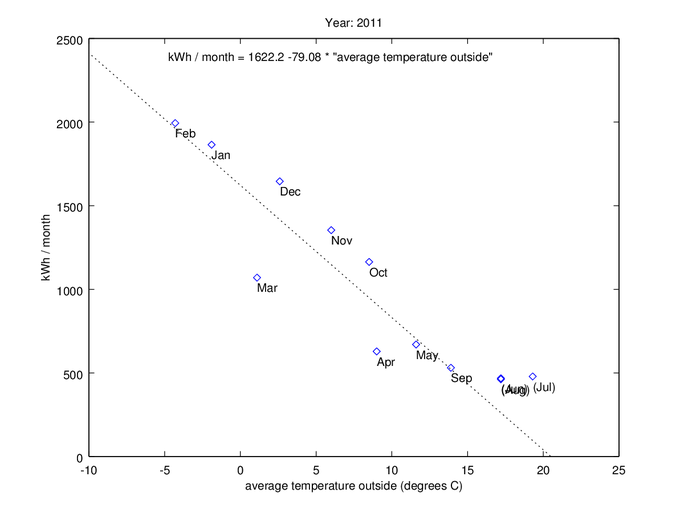 In the spring of 2011, we got a new heating system. It looks like it worked as expected during maybe part of Mars and April, but after that, the performance dropped down to numbers looking worse than the old electric radiator system!

There were no warning signs at all. It was first in the winter one and a half to two years later that I noticed it. At that point, the heat exchanger suddenly refused to run, and defaulted to only using direct electric heating.

It turned out that the reason was a tiny gas leakage in the cooling circuit. Too bad that the heat exchanger didn’t detect it until almost two years after it had occurred.

One interesting thing to note is that the energy consumption for June, July, and August were practically identical. I would say that the curve above maybe 17 degree average outside temperature don’t follow the fitted line anymore (by looking at this and all later graphs). For such high temperatures the fit look more like an almost horizontal line, so they should in my case be excluded by the line fit. If this would happen and at which temperature it would happen depend on a lot of factors, so use your own judgment if you are looking at this kind of graphs. The data points I’ve excluded are shown within brackets in the graph. 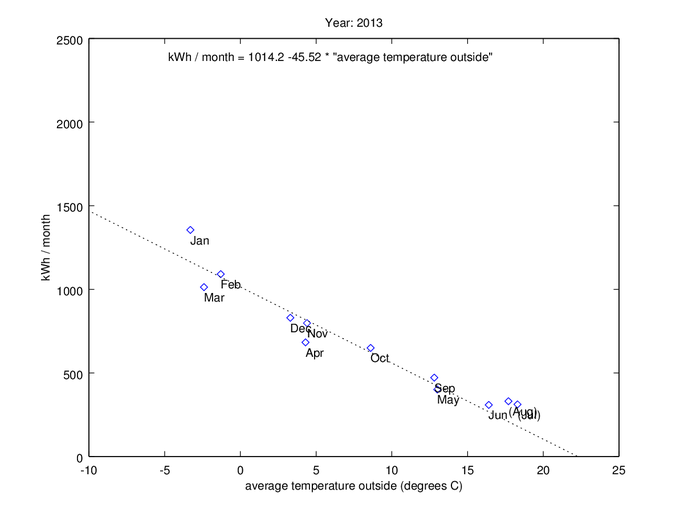 2013 was the first year when the new heating system worked as expected.

I usually turn off all radiators manually when it starts to be too hot during the summer. I could have turned off the circulation pump, but even though this heat exchanger still would run that pump for a short time every day (to prevent it from getting stuck), some house owners don’t dare, since it can be troublesome to start it again if it has been standing still for too long. 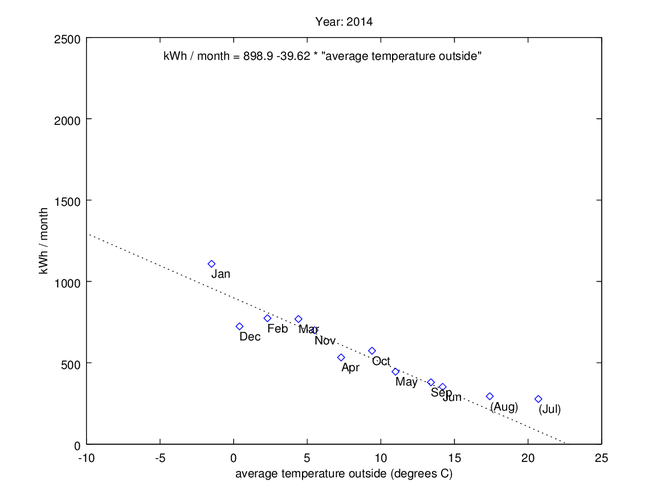 From now on, the ventilation in the apartment was reduced quite a lot. At zero degree C outside temperature, the energy usage dropped from 1014.2 to 898.9 kWh/month, which corresponds to an energy saving of 115 kWh/month, or 11%. If we look at 10 degrees average outside temperature instead, the difference in kWh/month is 56 kWh/month, which correspond to a 10% saving. Unfortunately, I didn’t pay attention to when they adjusted the airflow in the bath room. Otherwise, it might have been possible to figure out how much of the heating energy which is used to heat incoming air, and how much of the heating energy that escapes to the outside through walls, windows, the roof, and so on.

What if you don’t know your average monthly temperature?

I don’t have any suggestions for people living outside of Sweden. You would have to use your imagination. A bunch of people have weather stations which are connected to the Internet, and you might have one of those in your area.

If you do happen to live in Sweden, things would be simpler. You can browse the SMHI (Swedish Meteorological and Hydrological Institute) website. They have a “Ladda ner data” section, where statistics for any of their active temperature measurement stations can be downloaded.

Comparison between the apartment and a heat sink

For me, but probably not for most people, it would make sense to model the apartment as a heat sink. A typical heat sink is shown in the image below. 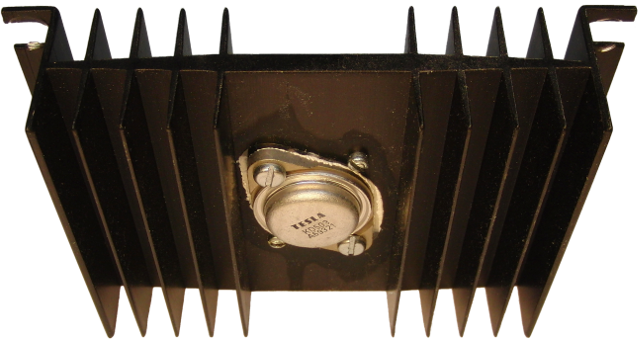 A heat sink doesn’t have to be more than a good heat conductor, which typically is used to dissipate heat from one point (such as the TESLA transistor in the image), to the ambient air.

Heat sinks are usually characterized by one coefficient with the unit degrees Celsius per Watt. That coefficient describes how much the heat sink would heat up if one watt of power was applied to it continuously. (The temperature increase is measured at the surface between the heating element and the heat sink).

One thing to consider is that the we could only measure the real applied indoor power back in the days when we had electrical radiators (i.e. the data back from 2010). Once heating of the apartment was converted to also used the air to water heat exchanger, the efficiency of conversion from electricity to heat goes far above unity. I have no data for the current heat pump, but we might get almost twice the energy out of the system than we put in in the form of electricity. For most intents and purposes, one could still use our heatsink analogy. (You would only get problems if you would try to calculate things such as the average thermal resistance of your walls, roof, windows, and everything else facing the outside).

Inverting both sides to get the same unit as a heat sink, we would have 0.010968 degrees C per Watt.

That basically tells us that heating the inside of the apartment by one Watt will increase the temperature by 0.01 degrees C.

It would have been interesting to go deeper into the physics of heat transfer, energy required to heat air, expected losses through different parts of the building, and so on, but this will have to do for now.