When I bought my hallway lamp a few years ago, I fitted it with energy saving light bulbs. Little did I know that those specific bulbs turned on really slow. I’ve always felt that it took ages before the light output gets close to its final value, and finally I decided to actually measure it as well.

There are a few different ways to present the results.

Combining both the video frame, and an animated plot:

I used a Logitech C615 web camera. It has the ability to lock all settings to manual mode, so the camera won’t adapt to changes in the environment. That meant that I could set it up for a decent image after the hallway lamp had been running for an extended period of time, turn the lamp off for an hour, and then record a video where one would see how the hallway lamp slowly turns on.

Since I’m working in octave quite often (a tool that aims to be matlab compatible), I decided to use octave for graphing. At first, I checked the same square in each and every image to get the intensity. The three lamps turned out to differ a bit in how fast they turned on, so I changed strategy.

The final strategy was to take the mean of almost all pixels in each video frame. The only pixels I excluded was those with an intensity exceeding the gray level value 200 in the final (brightest) frame, and pixels far to the right of the lamp.

For reference, the last intensity vs time graph is included here as well 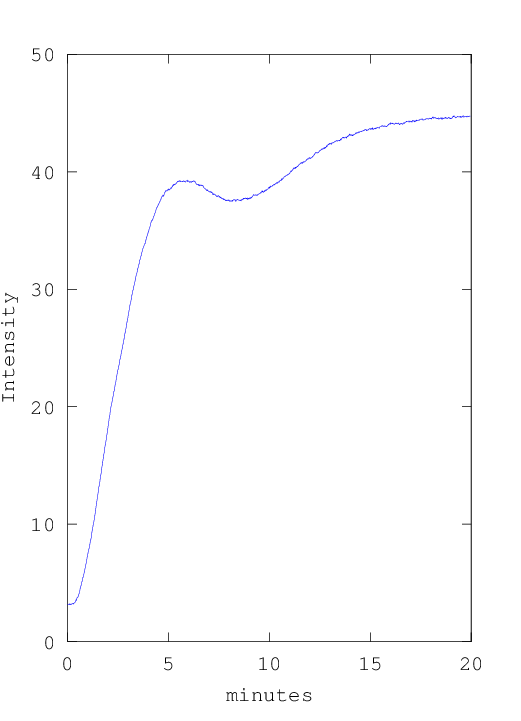